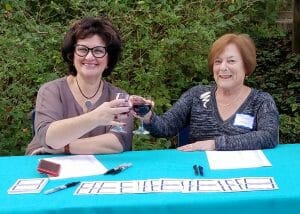 More than 100 residents and special guests turned out on the balmy October 21 evening for the annual NMC Board Open House that culminated our 50th Anniversary celebrations, with wine, beer and food aplenty.

Beyond the nonstop visiting among neighbors, a world map game invited people to tag locations they think of as “home” or origin, and a timeline game erupted in a scramble. Board President John Daroff led off the brief remarks, which included the introduction of the children of  the late Edmund Bennett who had envisioned and built New Mark Commons. 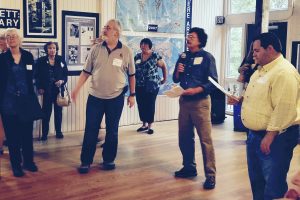 That’s Board President John Daroff on the right in the yellow shirt, leading the remarks at the October 21 event. Moving left are Board members Alex Belida, Alex Manolatos (in front of the maps) and David Schwartzman. Photo by Raj Gupta.

Retiring NMC Administrator Jim Denny gathered the biggest cheer as John saluted him. He was presented with a retirement present from the Board—a leather key chain with a metal ring engraved with—what else?—the GPS coordinates of the Clubhouse that Jim has cared for so well during his 15-year tenure.

“This is the last Board Open House that Jim … will have helped organize in his official capacity,” John said. “A huge thank you for your many years of service and friendship.”

Residents and guests wandered among the historical posters created by the 50th Anniversary Committee, frequently distracted by friendly faces and renewed friendships. Resident Rita Molyneaux came back the next day for the final showing of the exhibit, saying she was unable to focus on it during the party! 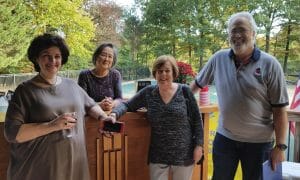 Margaret Chao, former Board president who headed the group that put together the October 21 event, stayed behind the bar most of the evening, despite frequent offers to replace her. Shown here with (L-R) Natalie Gora, Madeline Gupta and Board Secretary-Treasurer David Schwartzman. Photo by Raj Gupta.

Many residents drifted into the side room to view the special 50th Anniversary video that ran continuously. (The video, The History of New Mark Commons, is now available on the NMC website newmarkcommons.net, Celebrating our 50th Year.) Others gathered on the deck by the bar, tended with the help of former Board president Margaret Chao, who chaired the group that coordinated the evening’s events.

Attendees rallied again in the main room for the “timeline scramble,” answering a call to assemble under one of five signs indicating the New Mark  decade when they arrived in the community. Yes, it got a little hectic, but it was also fun.

Oddly, the 1988-1997 decade had the smallest group, with only seven people. “We scared off the riff raff,” Jim Adams quipped, when asked to explain their group’s small size. 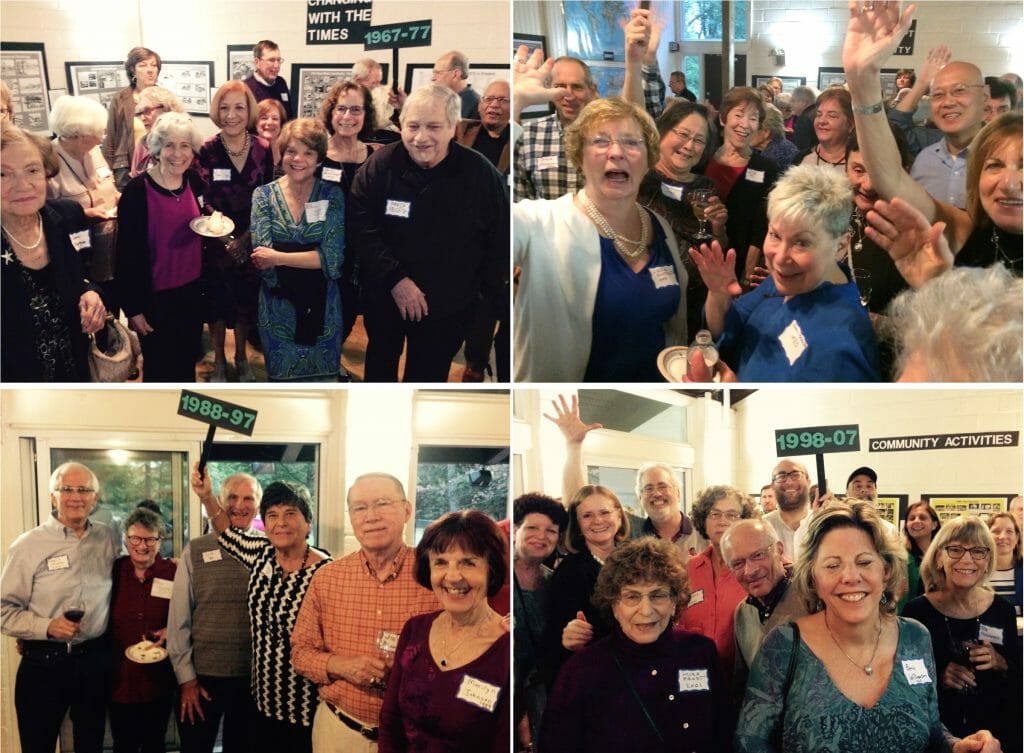 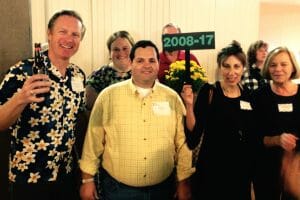 The evening was a homecoming of sorts for the Bennett family, who returned to join the celebrations of the community. Martin Bennett of Santa Rosa, CA, introduced to the gathering his siblings: Bruce Bennett of Mclean, VA; James Bennett of Bethesda; and Elizabeth Soto of Tucson, AZ. Bruce told this reporter that as a teenager, he had helped build some of the decks or balconies on the townhomes. While he was still alive, Ed Bennett came to several functions in New Mark, including the 25th anniversary in 1992. 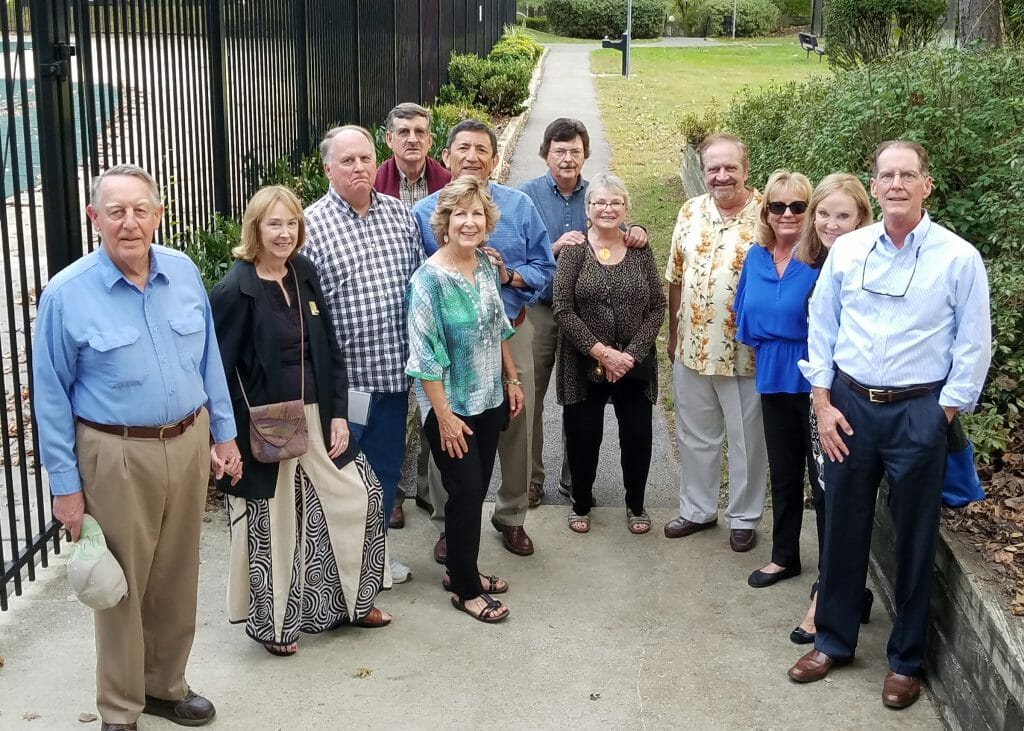 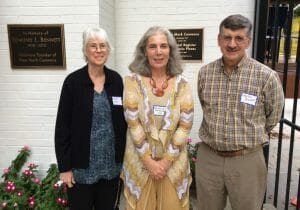 Mary Corbin Sies and Isabelle Gournay, the University of Maryland experts who researched New Mark’s history as part of a state-wide historical project, joined Martin Bennett, son of the late Ed Bennett, in front of the two plaques on the Clubhouse. Photo by Pat Reber.

A frequently asked question was this: How many original residents still live in NMC? We didn’t  know off hand, but have since checked and determined the committee had a list of 38 names to work from. That means about one in ten homes is occupied by people who moved here between 1967 and 1975, the last year for which we had directory information. Some on the list had moved from one street to another, but they still stayed in New Mark Commons.

Among the non-resident guests were Isabelle Gournay and Mary Corbin-Sies, of the University of Maryland, whose research into the Mid-Century Modern movement in Maryland helped inform the committee’s historical research and contributed to the listing of New Mark Commons this year on the National Register of Historic Places. The plaque documenting that recognition had been mounted outside the Clubhouse just days before the party, alongside the plaque honoring Edmund Bennett that was dedicated several years ago.

Tim and Ann Stewart, stalwarts over nearly two decades of the New Mark pool who met there as employees and then married, also came back for the party. 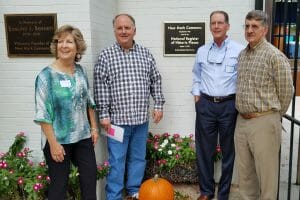 The new plaque on the Clubhouse declares that New Mark Commons was named to the National Register of Historic Places on August 1, 2017. Gathered around are (L to R) Elizabeth Soto of Tucson, AZ; Jim Bennett of Bethesda; Bruce Bennett of Mclean, VA; and Martin Bennett of Santa Rosa, California. The children of the late Ed Bennett, who built New Mark Commons, were on hand for the community’s 50th anniversary celebrations on October 21. Photo by Raj Gupta.

The “map game” attracted some attention. Of the 33 people who put sticky flags on the 2017 map, 16 residents claimed U.S. origins and 17 people international origins that included France, Germany, Sweden, Ukraine, Greece, India and Taiwan. At the 2007 40th anniversary party, 91 people participated, with only 30 indicating U.S. origins and 61 noting international origins.

We cannot, however, vouch for the scientific accuracy of the outcome, since when the 2007 map was removed from its container, sticky flags were floating off the map at the bottom! “Maybe we should do a digital map the next time,” quipped resident Judy Rudolph as the posters were taken in the days afterwards. 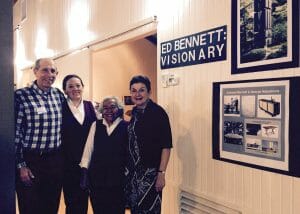 Rose and Steve Krasnow pose with Fela Peralta, standing next to Rose. Fela, and her relative next to Steve, are familiar helpers at New Mark events. Photo by Pat Reber.

Oh, and about that penguin? On the 2007 map, someone mysteriously placed a marker on Antarctica as their place of origin. It had been hoped that someone in the neighborhood would come forth and reveal themselves as a penguin—or even a leopard seal!