Our History: A Pace-setting Community

For over 50 years, New Mark Commons has played a central role in the Rockville, Maryland community.

This is our story.

“New Mark Commons is part of “one of the most extensive experiments in ‘situated modernism’ in the United States, an experiment which the Washington, D.C. suburbs, with their wooded, steeply sloped lots nestled in the stream valley system of tributaries of the Potomac River, helped nurture.”
University of Maryland Professors Isabelle Gournay and Mary Corbin Sies, in the application for New Mark Commons to be included in the National Register of Historic Places, June 2014.  The final inclusion on the Register was approved by the National Park Service on August 1, 2017, amidst the community’s 50th anniversary celebrations. The 50th Anniversary Committee asked residents to share their memories and stories, and compiled them in a booklet distributed to each household: “NEW MARK COMMONS: A Community Memoir, 1967-2017.”

The first model homes in New Mark Commons opened in 1967, the product of ongoing collaboration between builder Edmund Bennett and architects Keyes, Lethbridge & Condon, who shared the joint vision of introducing affordable contemporary, modern architecture in preserved natural surroundings to the country.

They were among the first in the Washington area as well as in the country to pursue such ideas, and many of subsequent ideas about community planning were forged by such efforts.

New Mark Commons’ 96-acre community was a unique development from its inception. Designed to be a “new mark” upon the landscape, the community was one of the first planned unit developments to be approved under an ordinance adopted by the City of Rockville in 1964. The City’s planning staff recognized that the city could no longer afford to provide a desirable level of amenities for the influx of population that it was experiencing. The ordinance allowed a developer to build at higher densities in exchange for the provision of open space and recreational facilities.

Bennett, a native of Bethesda-Chevy Chase, quickly saw the possibilities this allowed. His firm had already received over 35 national and local awards for innovative architectural techniques, building design and site planning, but New Mark was his first PUD.

Bennett purchased the site, formerly known as the McConihe tract, in 1964, and employed the firm of Keyes, Lethbridge and Condon to handle the design and land planning. 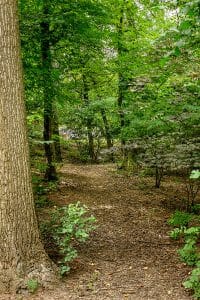 By 2016, as New Mark’s 50th anniversary approached in 2017, the community had moved forward in efforts by architectural historians at the University of Maryland to have New Mark Commons join the National Register of Historic Places.   On August 1, 2017 New Mark Commons was added to the Register. The listing recognizes the community’s importance as a prime example of mid-century modernism and its achievement, through strict architectural controls, of maintaining the integrity of the original designs.

One of Bennett’s major objectives was to preserve as many trees as possible. To that end, a complete tree survey was undertaken before design commenced. Since the site also contained a small stream and several springs, Bennett decided to create a small lake to serve as a focal point for the community. The original vision also called for a village center containing shops, a restaurant and convenience store, to be located near the pool and clubhouse.

Bennett believed that the difference between an average subdivision and an
outstanding one was “the way the land is planned.” The houses were situated to preserve as much of the natural landscape as possible and to avoid the rigid, geometric designs of the new suburban communities that mushroomed in the post-World War II era. Only a handful of homes face the main thoroughfares of New Mark Esplanade, Scandia Way and Welwyn Way.

Bennett drew inspiration for the innovative “situated modernism” from visiting “new towns” that sprung up across Europe in the post-World War II era. The street names bear testimony to that vision: Scandia; Basildon, Bracknell and Stevenage in England; Cumbernauld in Scotland; Farsta and Vallingby in Sweden; Tapiola in Finland.

“With the planned residential unit, it is now possible to put first things first, by designing a complete community which can have integrity and charm and be at one with the land, reversing the usual process in which a community only emerges, if at all, as the haphazard end product of a series of unrelated actions,” Bennett once said.

The 384 homes, comprised of townhomes and detached homes in nearly equal measure, include a large number of “ mid-century modern” houses – the name given to residential architecture that emerged during the 1950s and 1960s to accommodate the post-war baby boom and evolving taste for modernism.

Cathedral ceilings, large windows and sliding glass doors are combined with many open floor plans. Three and four bedrooms are quite common. The architecture, siting and window placement reinforce the sense of being surrounded by nature and living with natural light filtered through the tree stand. The swimming pool is one of the few in the surrounding area that offers partial shade off and on through the day. 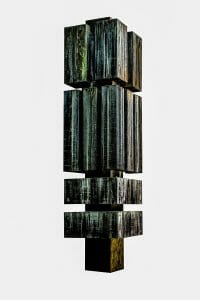 The “totem pole” sculpture at the Maryland Avenue entrance to the community represents the first letter of each word of New Mark Commons: N at the top, M in the middle, C at the bottom. Its graphic representation occurs throughout New Mark communications, including on this website.

New Mark Esplanade, the main thoroughfare, was the only street in the community designed for through traffic. The original street plan called for three access points to the project, including one from Maryland Avenue, one from Potomac Valley, and one from Monroe Street. However, as more residents began to move in, they did not relish the thought of cut-through traffic, so the Monroe Street entrance was dropped at their request. This change probably had a lot to do with a later decision to abandon plans for the commercial center.

Open space is one of New Mark’s primary amenities. About 15.6 percent of the total site is open space, including the 4.5 acre lake and the pedestrian walkway/bike path system. The recreational facilities occupy 2.5 acres in the center of the site and include a 25-meter swimming pool, a wading pool, two tennis courts, a basketball court, picnic tables, tot lot and clubhouse. The clubhouse serves both community and private functions.

The first models at New Mark Commons opened in January 1967. At that time, Rockville’s population was exploding, increasing from 16,000 in 1960 to over 40,000 by 1966. Originally, the developer hoped to complete construction by the summer of 1969. However, the project was only 50 percent complete by 1971, and recreational facilities were not completed until 1974.

Bennett felt that sales were slow because the concept was so new. New Mark Commons was the first major contemporary design project in the area, and the siting did not, for the most part, accommodate the traditional front door facing the street and backyard extending from the rear of the house.

That skepticism, however, was not shared by the Montgomery County Sentinel newspaper, which wrote on January 26, 1967: “From the first view of the lake on entering New Mark Commons, continuing along New Mark Esplanade, its single main thoroughfare, to the village center, the resident or visitor will be aware of being in a different kind of residential environment, one which provides pleasing views at every turn, with a broad range of conveniences and attractions normally not found in a residential subdivision.”

Another factor that has been attributed to the lag time in occupying New Mark Commons was the general downturn in the housing market in the early ‘70s as a result of rising interest rates. As a result, Bennett ended up selling two parcels of property to other builders. The colonials and most of the homes off of Scandia were built by other developers but were incorporated into the community association. In 1985, Charles Burgdorf, who purchased the land that had been set aside for the village center, received approval to build an additional 13 contemporary townhouses. This raised the total number of units in the community to 384, consisting of 198 townhouses and 186 detached homes.

A half century later,  New Mark continues to be a vibrant and desirable place to live with a strong sense of community, and the community remembers the developer for his vision and determination to see the project through. In 2017, the community celebrated its 50th anniversary with year-long activities and publication of a community memoir. On August 1, 2017 New Mark Commons was included on the National Register of Historic Places, which is administered by the National Park Service.

New Mark resident David Sloane and his sister-in-law Judi Francis created the beautiful video documenting the history of NMC. We hope you enjoy it.