The Postman Saved the Day 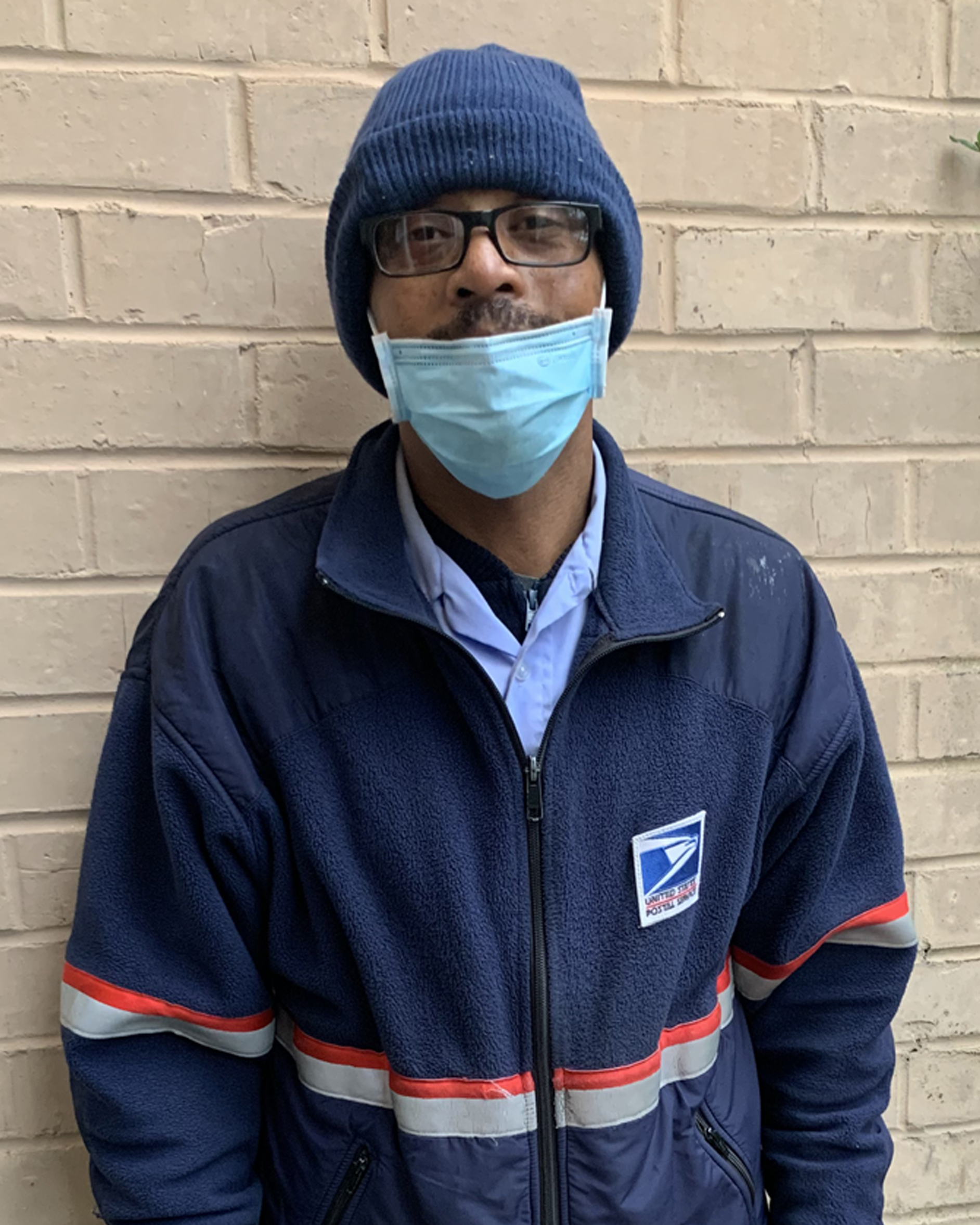 Bernie the postman, who delivers mail to our neighborhood, posed the day after the fire for this photo by Ruth O’Sullivan

The quick thinking of Bernie, our postman, saved a New Mark townhome from burning down the other day.

Bernie, who prefers not to give his last name, is modest about his role. “I was just in the right place at the right time,” he told this reporter, shrugging off the praise. “We’re all part of this community, we help each other.”

On January 14, he was trying to deliver mail through the door slot at 810 New Mark Esplanade. Smoke came pouring out, he could hear the smoke alarm blaring and a dog barking.

He pounded so hard on the door that next door neighbor Ruth O’Sullivan heard him. But no one answered.

Bernie then knocked on Ruth’s door, and she called 911.

“I had the feeling he would have banged on every door in the block until he got help,” Ruth recalled. “Then he just went on his way delivering the mail!”

Half a dozen fire trucks, numerous rescue vehicles and Rockville police cars poured into the neighborhood in response. After firemen broke down the door, they discovered a small smoldering mass on the stove, which they removed and set outside. No one was injured, and the main damage was from the smoke. 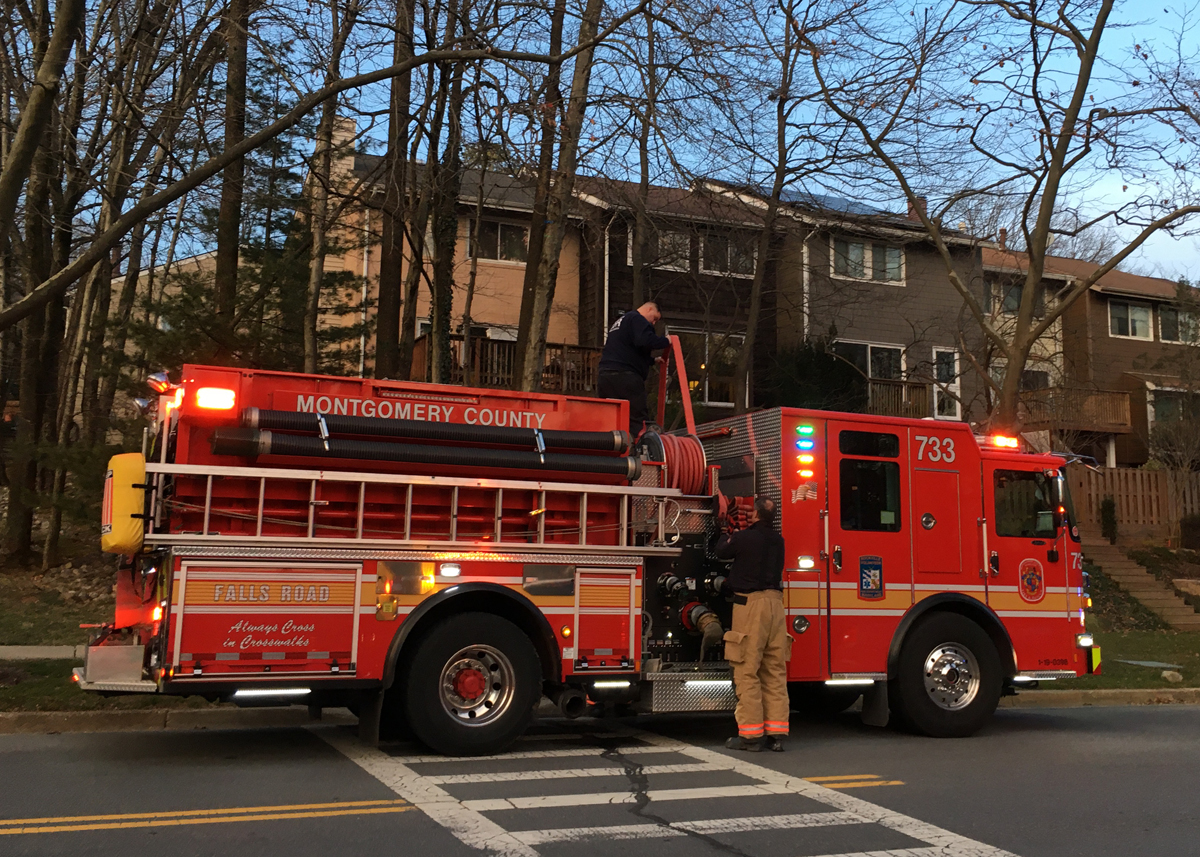 Montgomery County firefighters parked on the Esplanade, seen here winding back the hose used on the fire in the townhome on the left

Standing outside and holding her New Mark Directory that day, Ruth had fished out contact numbers for the firemen to reach the residents of 810 NME, Lia Gorgiladze and Irakli Kavsadze. But they were unreachable on the phone.

Enter Dixon, the eight-year-old chocolate lab-retriever from 810, held on a leash by a rescue official who asked if Ruth and Sergei Suslov of 808 NME could keep the dog until the neighbors returned. Otherwise, police would take Dixon with them.

To keep Dixon happy, two Rockville police officers emerged from 810 with a bowl of dog food. “He ate it right up,” Ruth said.

By the time Lia arrived home with her daughter, fire and rescue had departed. Lia had rushed home from a dental appointment after getting an urgent email from Ruth about the fire. She was relieved that Bernie had been there to see the smoke and that nothing worse had happened to her house. “Everybody was so nice,” she said. 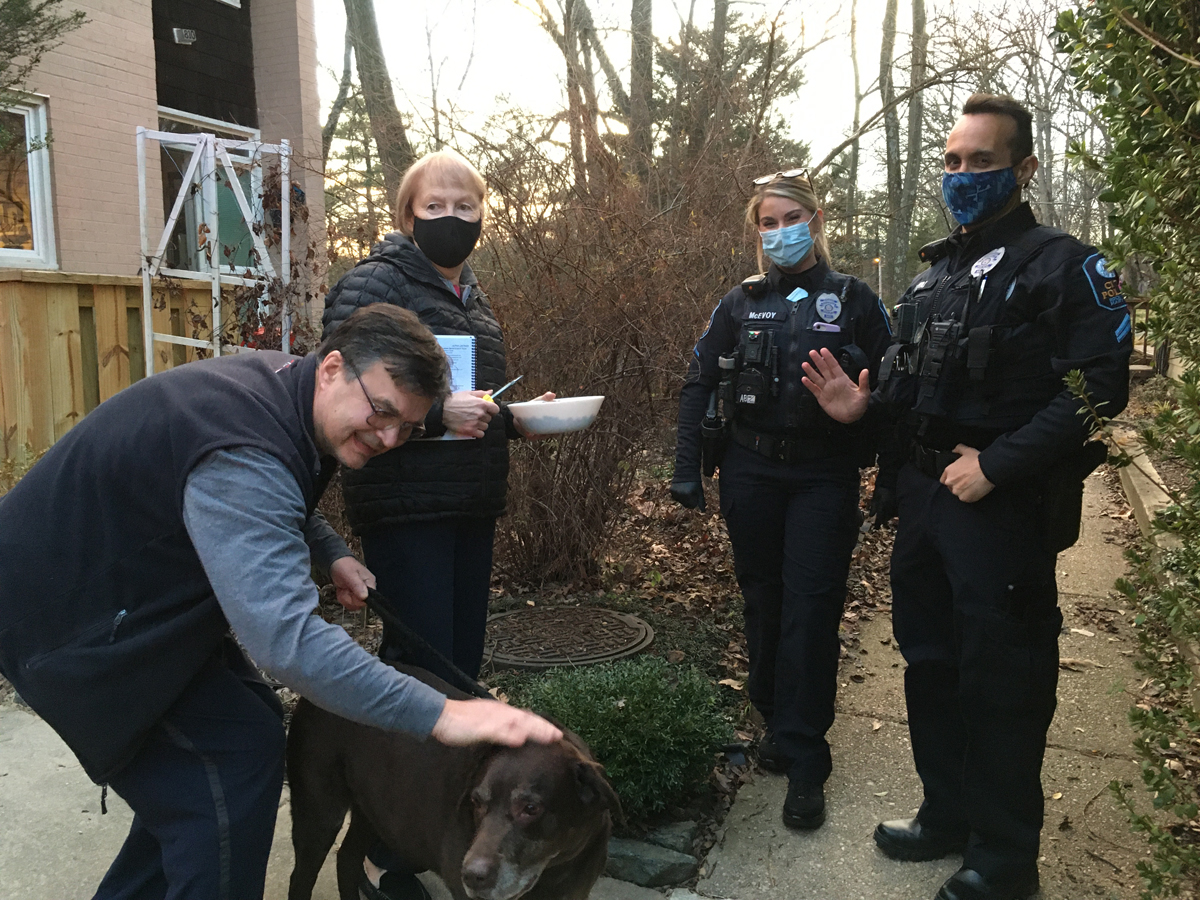 “We hadn’t cooked on the stove all day,” Lia said. But her daughter had baked brownies the day before and left them out on the cutting board on top of the gas stove.

“We think Dixon jumped up on it trying to get to the brownies, and turned on the burner,” Lia said. “Dixon was very stressed by all the noise and action when we got home.” She took him to the vet the next day to be checked out.

Lia said she planned to have doors put into the kitchen entryway and would probably turn off the gas to the stove whenever she left the house.

“The postman deserves recognition for this,” Ruth said. She thanked him the next day and took his photo. She planned to contact his Post Office supervisor the next day. His official route name is “Rockville Main Route 47.”

New Markers who streamed out of their homes after seeing so many fire and rescue vehicles speed into the neighborhood were amazed at the numbers.

On its safety tips page, the Service lists cooking left unattended and/or materials left near or around the stove as the leading cause of home fires.

In the end, it was a cautionary tale with a positive ending, even if it left a kitchen a bit smoky. To the great benefit of our community, we have an alert postman; an emergency response system that acts fast; and neighbors who care enough to take in a dog and track down people.