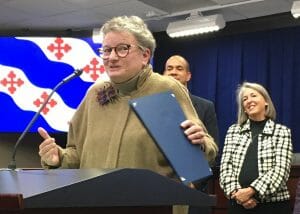 Kathleen Moran accepts the Good Neighbor Award, explaining that she couldn’t “help” getting involved in her community after retiring as a city employee. Rockville Council member Monique Ashton presented the award. Mayor Bridget Newton and Council member David Myles are in the background.

New Mark’s own Kathleen Moran was among 13 Rockville residents honored on November 18 for their work as volunteers in supporting their communities, which also included Lincoln Park, Fallsgrove, Woodley Gardens, King Farm, Twinbrook, and Rose Hills.

Officials of the Mayor and Council said it was the largest number ever honored at the annual event. The meeting room was packed with families and friends of the recipients and resounded with enthusiastic applause for each recipient.

Kathleen, the recently named President of the New Mark Commons Board of Directors, was nominated by neighbor Ellen Stein for the award. The two have worked closely in the past on the Board and continue to work together in preserving New Mark’s landscape and tree health.

“Kathleen is the eyes and ears of New Mark,” Ellen told the City Council.

“Every day she walks our New Mark neighborhood checking areas that need improvement: shrub and trees that need trimming or removal, or cleaning of walkways and paths. As she walks, she listens to residents, and often helps with weeding or trimming,” Ellen added.

Kathleen, who accepted the award from newly elected Council Member Monique Ashton, noted that she is a retired employee of the City of Rockville. Then, shrugging in her typical fashion, Kathleen said she looked around and found many needs in her own neighborhood where she could be of service. She couldn’t help getting involved.

At the time of her nomination in September, Kathleen was Treasurer of the New Mark Commons Homes Association Board of Directors. In the nomination letter, Ellen highlighted how Kathleen had, as a volunteer, learned new skills in handling budget issues and forecasts for future community needs. Ellen wrote that it was an example for other volunteers to “move outside one’s comfort zone and work to develop a new skill.”

A wide variety of Rockville neighborhoods was home to the 2019 award recipients.

The Lincoln Park Civic Association nominated Madeline Jackson on the occasion of her 96th birthday, citing her “positive contributions to neighbors through her good deeds.” The diminutive Mrs. Jackson accepted the award, bending the microphone to her height and urging people to do whatever they do with the fullest commitment.

The late Marsha Schwartz was recognized for her work in establishing and upholding architectural standards of the Homes at Fallsgrove Owners Association – something her husband, Sorell Schwartz, who accepted the posthumous award, called a critical, but thankless, responsibility. The salutation saluted Marsha for her unusual ability for “deep empathy” in her work on this sensitive task, and for her work with the homeless.

Two recipients – Eric Fulton of Woodley Gardens West Civic Association and Mike Stein of Twinbrook – were named for their contributions to pedestrian safety in Rockville.

Sergio Diaz, the owner of a construction company, was named for volunteering to help elderly people with handiwork and snow clearing. He was thrilled to receive the award, as were his children who stood with him when he accepted it. Matt Goenner was honored for similar acts, helping with yard work, handiwork and being “the type of neighbor I wish everybody had in their lives,” said Nicole Logsdon in the nomination. Peter Lovell, of the Rose Hills Falls Board of Directors, also was recognized for his help in clearing sidewalks of snow and helping neighbors who had problems.

Tracy Jackson, president of the King Farm swim team, in addition to coordinating about 200 swimmers through swim season, had helped to identify and obtain a practice location for the Woodley Gardens swim team after its community pool facilities burned down. She had been nominated by her husband, who came forth with their children for the award. At the microphone, Tracy turned to her children and urged them to follow the example of community service on display at Rockville City Hall that evening. 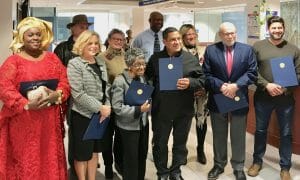 Twelve of the 13 recipients gathered outside Council chambers after the award ceremony. It was the largest number of volunteers ever honored by Rockville in this annual Good Neighbor Award event.

Among the other recipients:

For full details, follow this link to page 12 in the Mayor and Council agenda packet. 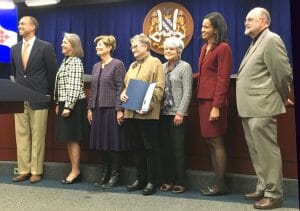