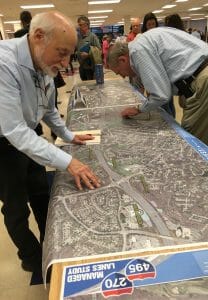 New Mark resident Arthur Katz studies a version of the Falls Road interchange as envisioned by the state.

It was called a “workshop,” but when the State Highway Administration laid out plans last week at Wootton High School to widen I-270 and the Beltway, the officials simply read off charts already available on a website.

Rather, the state was promoting six alternatives that purportedly would save commuters anywhere from 45 to 73 hours of drive time a year. The presentation also projected monetary savings of up to $1,460 a year and reductions in delays of up to 35 per cent.

The plan calls for a private company to add up to four lanes on I-270 between the Beltway and the Intercounty Connector. That would expand the lanes to 16 from the current 12 at the Falls Road Interchange, for example. Feeder lanes would be eliminated, and the four toll lanes would straddle the middle.

The Falls Road bridge would need to be rebuilt, officials said. Considerable property would be taken from backyards on Marcus Court; from the Millennium Garden at the corner of Potomac Valley; from Julius West Middle School; and from other properties around the intersection.

Pete Altman, who chairs the Don’t Widen 270 group, was confounded by the optimistic projections of saving time and money that were read off in the Wootton auditorium. He questioned why the underlying analysis has not been made public. Without that, he said, there’s no credibility to the “traffic relief you are using to promote and sell this program.”

His comments brought loud applause from the crowd of about 200, and a response from the State Highways Administration official who led the presentation.

“Analysis doesn’t happen overnight,” said Lisa Choplin, the state’s director of the private toll lanes project. She said the report and analysis won’t be complete until “later this fall.”

Altman responded: “If reports aren’t done yet, how can you go around claiming how much traffic would improve? If you can’t release the analysis now, you shouldn’t be talking about it.”

And so the question and answer session went, with one resident after another challenging the need for wider roads and asking why the state of Maryland has ignored putting money into public transport.

Rockville Mayor Bridget Newton and resident Arthur Katz questioned why the state has not worked closely with citizens and local governments to find the best alternatives. Although the public gave overwhelming preference for public transport during information sessions last summer, the state has dropped the idea because it would not be profitable for the private toll lane builder.

“You really should be reinstating transit alternatives into the process,” Katz said. “You threw them out on the basis of financial viability.”

Katz, who decades ago had served as a chief negotiator on a road project in Boston, said the state needed to bring together various community groups and local elected officials to find a solution.

Mayor Newton said the entire process has shut out local government. She said that State Secretary of Transportation Pete Rahn had promised no homes would be taken, for example. Yet plans call for up to 34 homes to be taken along the Beltway and nearly 1,500 properties to be cut back permanently or closed off curing construction along both roads.

“This has felt like a fait accompli from the state,” Newton said. She said a number of people including senior citizens in Rockville have not been able to sell their homes for over a year due to uncertainty about the state’s ambitions.

Echoing other demands from Montgomery County residents, Newton urged the state to start north of the Intercounty Connector and Father Hurley Boulevard with any widening plans. She was referring to the real bottleneck where the road drops from six lanes to two. Critics of the state’s plans say an expansion south of the Intercounty Connector will only worsen the bottleneck going north.

Newton indicated she already knew the answer, citing Rahn’s own assertion that the south must be built first in order to pay for the widening in the north, where toll income was seen to be insufficient to cover those northern costs.

The Wootton High School cafeteria sprouted more than a dozen displays explaining the plans, and state officials were on hand to help. Large posters with aerial maps of the Beltway and I-270, spread flat on the cafeteria tables, offered images of what each section of highway might look like under the various alternatives. 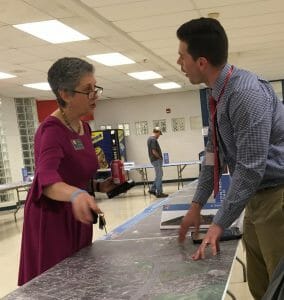 State Senator Cheryl Kagan, left, tries to clarify access to a proposed new Gude Drive interchange with a state official (on the right).

State Senator Cheryl Kagan hovered over the I-270 stretch from West Montgomery Avenue to Shady Grove Road, zeroing in on a proposed new interchange for Gude Drive.

She was amazed that the only access to a Gude Drive interchange would be from a toll lane in the center of the highway. “How far in advance would I need to know to get to the toll road to get off there?” she demanded.

There was no clear answer from the state official standing by. But he said she could avoid the toll road by driving north one more exit and doubling back to Gude on local roads.

The State Highway Administration says the expansions are needed to accommodate projections of increased population and traffic in the coming decades. The Beltway plan foresees adding up to four toll lanes from the George Washington Parkway to I-95 in the project’s first phase.

Traffic analysts cited by the “Don’t Widen 270” group say the reason one can’t build a way out of congestion is something called “induced demand,” which means traffic will grow to fill the newly opened space. The group notes that the expansion of 270 in the late 1980s was supposed to have accommodated increased traffic for several decades, yet the highway was congested within five years after completion. 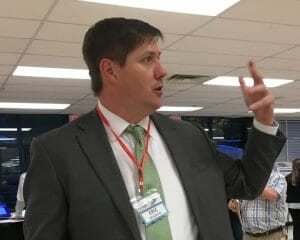 Eric Beightel of GEC engineering consultants explains estimated impacts on property, noise and other consequences of road expansions to a supporter of the Don’t Widen 270 group.

Additional public presentations at 6:30 and 8:30 p.m. are scheduled for May 14 at Oxon Hill High School and May 16 at Seneca Valley High School. The public has until June 14 to comment on the alternatives (see below.). State Delegate Kumar Barve, who led efforts in the state legislature to slow things down, has urged residents to “be noisy” in their opposition.

The General Assembly rejected efforts in recent months to slow down the process. Any private road plan must get final approval from the powerful three-member Board of public Works. The members are Governor Larry Hogan, who is pushing for the expansions; State Treasurer Nancy Kopp, a Bethesda resident; and Comptroller Peter Franchot, a Takoma Park resident.

The public has until June 14 to comment on the alternatives. The MDOT Public Comment page has a form to do that. General information about the project is available on the Maryland.gov website at http://495-270-p3.com.