Six Candidates Vie for Three Seats on Board 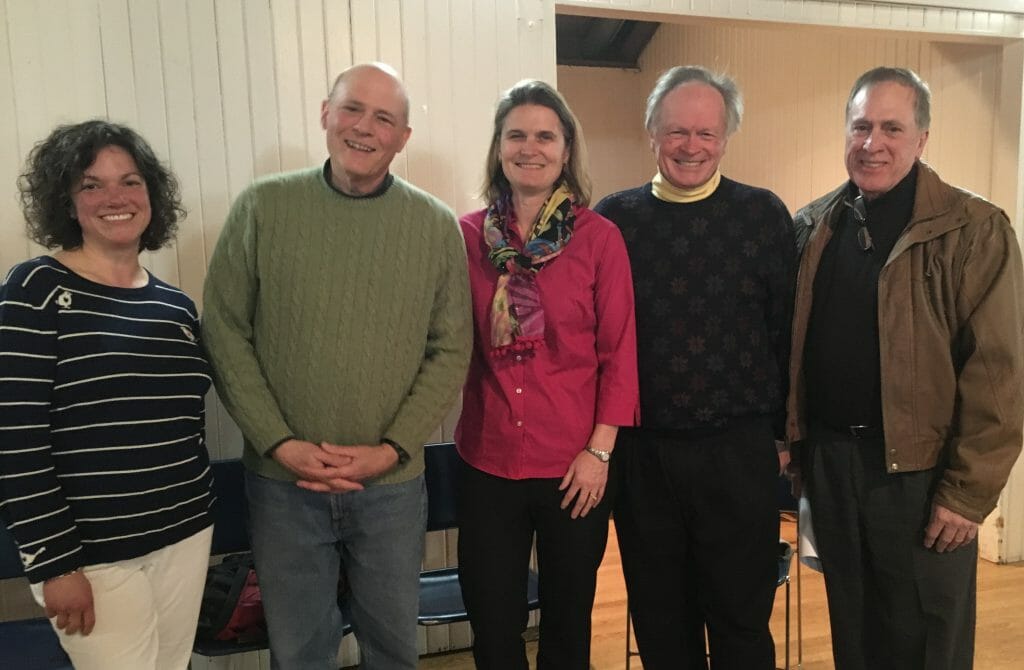 After last year’s drought of challengers to two Board incumbents, this year’s elections have drawn six candidates for three open seats, giving homeowners a wide range from which to choose. On Thursday night March 7, residents got to hear directly from them ahead of Monday’s March 11 Annual Meeting (details at bottom.)

Questions and discussion focused on two major challenges for the next Board; maintaining aging infrastructure while keeping down costs and maintaining cohesion in the community, especially between residents of detached and town homes.

While neither of those issues is new, the infrastructure questions are particularly pressing given the list that needs attention: the 52-year-old amenities that drew owners here in the first place – the pool, tennis courts and basketball court; rising costs of removing elderly trees; maintaining retaining walls on common property; and dredging the lake.

More than 30 homeowners turned out at the Clubhouse to hear from the candidates, three of whom are townhome owners and three are detached home owners.

While homeowners received detailed bios and statements in the mail, here’s a brief introduction of each candidate as they might best be recognized in New Mark.

Karin Boychyn (3 Letchworth Circle) has worked with the International Dinner committee and volunteered for community cleanups since moving in three years ago with her husband and two children.

Brent Gulick (23 Welwyn Way) and his wife have been residents since 2005 and are the parents of the avid 10-year-old swimmer Matthew.

Becky Phillips has lived at 806 NME for about six years, with her husband and son Jack.

David Sloane (1 Stevenage Circle) moved here in 2008, joining his wife first in a townhome, then moving to a detached home. He served as a member of the 50th Anniversary ad hoc committee in 2017, contributing photographs for the Community Memoir booklet and the New Mark Commons website and creating large posters for a special historic exhibit at the clubhouse. He also helped create the video documentary of New Mark history posted on the website.

Ron Tipton (218 NME), resident for 13 years, was unable to attend due to a previously scheduled trip, but in a written statement read on his behalf, Ron said he is the “old guy” you see walking around the neighborhood every day and emphasized his work as an environmentalist familiar with maintaining infrastructure as president and CEO of the Appalachian Trail Conservancy, and working in other conservation organizations.

There was little disagreement among the candidates present – all want to preserve the beauty and cohesion of the community and maintain the infrastructure. It affects “our home values,” Becky said.

“If the townhome area starts looking dilapidated, it will reflect on the detached homes,” Joe said.

David, who described New Mark as “quite an oasis,” added: “I believe we … are all going to rise and fall together.”

Priorities for capital improvements ranged from maintaining the clubhouse and pool as two of the most important features of the community, and lake dredging (David); dredging Lake New Mark “if it starts smelling bad”, but more importantly, taking care of anything “that’s falling apart” that poses danger such as retaining walls and aging trees (Becky); retaining walls, the pool filtration system, the ball courts and tree maintenance (Joe); and looking ahead for 10 to 20 years for infrastructure needs “so we can live here happily ever after” (Karin).

Perhaps the Homeowners Association should launch an annual survey of which parts of the infrastructure are considered most important by residents, David and Joe suggested.

The current Board has carried out some heavy lifting over the past two years. The biggest task was managing the transition from 50 years of management by three successive residents when Jim Denny retired. The Board hired Abaris Realty in October 2017, and one resident, Steve Bernstein, wanted to know how the candidates viewed their performance so far.

“We have been spoiled … [by] picking up the phone and talking to Jim,” Karin said. “In the first year, we had to get used to the way questions were answered [by Abaris.]” She said she thought it had been a learning experience both ways after “a lot of misunderstanding.” The other candidates agreed that communications had improved. David said Abaris had brought “economies of scale” to New Mark in terms of the company’s professional contacts with vendors.

Sam Phillips, husband to Becky, wanted the candidates to comment on “any missteps” they’ve seen by the Board that they could have improved upon. His question dovetailed with another question from resident Dave Siebart about dues increases and how to reduce spending.

“I think it’s clear that this community had not addressed all the infrastructure needs that it should have,” David said. Becky said she thought “finances were mismanaged” and dues had not been raised in enough increments. “The dues raise was shocking,” she said, referring to the 50 percent increase in the current budget to, among other things, help pay back the $750,000 loan for repaving the townhome parking lots.

“We were due for a correction of the dues,” Karin said. “Obviously we had very low dues.” She said her family was amazed when they moved in that there was a community with swimming pool and tennis courts with such low homeowner dues.

Joe noted that the Reserve Study prior to the one done in 2017 was done when he was on the Board. “The fault was, we put it in a drawer and forgot about it,” he said.

Brent, a latecomer, missed more than half of the forum, but weighed in on the finance issue, saying: “‘Even though we took out a rather large loan, it was needed and needed to be done.” He opposed any additional dues increases, suggesting that New Mark should “monetize its trees and birds” and take photos of the doors. “We don’t need to soak each other’s pocketbooks; we need to use the dirty word money.” He worried that dues increases would “drive people on fixed incomes out of the community.”

Saven Willkins, who serves on the Lake subcommittee, wanted to know about the long-overdue lake dredging, bringing up the erosion issue that is carrying sediment down to its bottom.

Brent suggested cofferdams (watertight enclosures) upstream might help, but pointed out a major problem with dredging, which is the new rules on how to handle the sludge. “We can defer for three years,” he said.

Joe noted that appeals to the City of Rockville for help have not gone anywhere and that dredging probably needed to be looked at “within the next five years.” Karin suggested there were other more important infrastructure projects, but lake dredging should be on the “top half” of the list. David called for soil conservation issues to be put back on the table.

Madeline Gupta asked candidates to share their thoughts about how to get more people involved in the community. David suggested a “buddy” system to recruit neighbors, perhaps dividing the community up into sections. Karin suggested a welcoming committee “so people are aware we have a HOA and why costs are what they are.”

Looking out at the crowd at one point, Karin quipped: “I see all the familiar faces. We should get the other half!”

NOTE: Doors open at 7:00 p.m. Monday March 11 for the annual meeting, which will start promptly at 7:30 p.m. Refreshments will be served. Two of the open seats are being vacated by Alexander Manolatos and Magnus Turesson, who are not running for re-election. The third seat became vacant when David Schwartzman resigned. The two top vote getters will serve three-year terms, while the third place candidate will finish the one year left in David Schwartzman’s term.