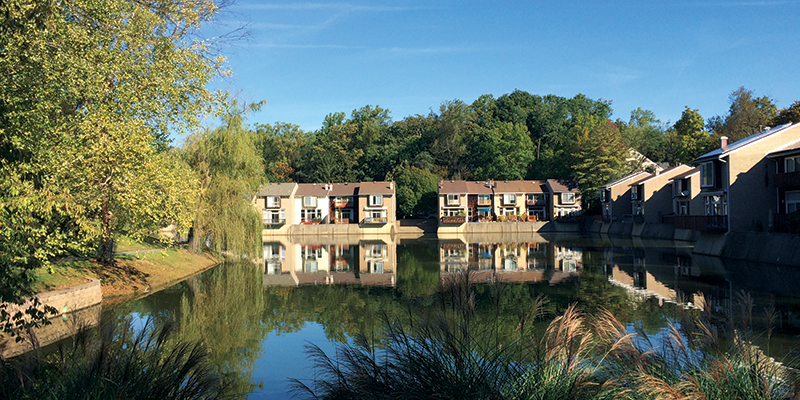 In the late 1960s, developer Edmund Bennett had a vision for a neighborhood in which contemporary homes were designed around the trees, and nature was preserved.

New Mark Commons, tucked off I-270 just south of Maryland Avenue, celebrated its 50th anniversary last year and was placed on the National Register of Historic Places. Still shaded by a canopy of trees, its 384 residences—about half townhouses and half detached homes—look much as they always have, thanks to strict architectural standards that limit renovations. Several walking paths weave through the neighborhood, and there’s a lake with a fountain at the center.

“As soon as I saw the trees, they really spoke to me,” says Madeline Gupta, 75, a retired nurse who spots blue herons, geese, deer and foxes from her home. “It has a sense of place.” She moved to New Mark in 1976 with her husband, Raj, 75, a civil rights attorney, and raised two kids in the neighborhood, which feeds into the Richard Montgomery High School cluster.

All homeowners are members of the New Mark Commons Homes Association, and its swimming pool, basketball court and tennis courts are a hub of activity for residents. Neighbors use the clubhouse for an annual cocktail party, a Halloween celebration and an international potluck dinner, complete with linens, flowers and china.

“People from all different ethnic backgrounds live here, and they bring homemade dishes,” says Alexandra Manolatos, 70, a resident since 1999. “I try not to sit with people I already know so I can meet a new neighbor.”

Manolatos chose New Mark, located about a mile south of Rockville Town Center and just east of Julius West Middle School, because of its proximity to the Rockville Metro station. Plus, she says it reminded her of the row house neighborhood in Baltimore where she grew up. “I have the same feeling here,” she says. “In my cul-de-sac, I know everyone, and they know me.”