The Fireside Park Apartments Fire: Get Involved! A New Mark Commons Board Member Did … 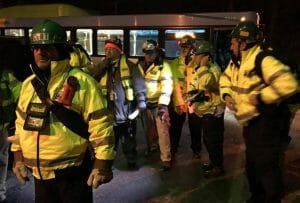 A three-alarm fire on February 2 that displaced 33 of our neighboring families in the Fireside Park Apartments prompted an outpouring of concern and offers of donations from around New Mark Commons, as new homes are sought for them.

David has been training for about a year to work in disaster response with the CERT Go-Team, and the Fireside Park Apartments fire was his first response to a fire, and the third for the Go-Team in the past year.

David received his activation text message at 6:20 p.m. Friday evening and reported for duty about 7 p.m. He was joined by 15 other Go-Team members. Their first task, after their initial briefing, was to walk with firefighters through the first of the three destroyed apartment buildings. They learned how to avoid danger when they would start escorting residents back into their apartments to retrieve essential documents, medicines and belongings. 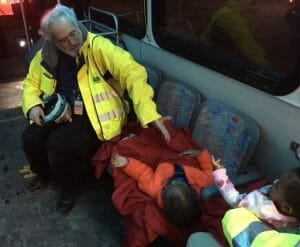 DSS at Fireside Park Apartments NMC Board Member David Schwartzman looks after two children, while their parents were escorted back into their damaged apartment Friday evening to retrieve essential belongings.

Residents had only 15 to 20 minutes to fetch what they needed, as the insides of the buildings were toxic from the fire damage, David said. CERT volunteers wore protective boots, clothing, helmets and masks, since they were exposed through repeated trips inside.

“Some people were very traumatized, and all were in shock,” David said. “One person came in, looked at the destroyed apartment, and ran out.”

“One retired woman was wearing only a nightgown, a coat and crocs, and I suggested she get closed-in shoes and warm clothing,” he said.

“She got an old picture book her father had owned. I asked her, ‘Any stuffed animal you’d like to bring with you to comfort you?’ She said, ‘Thank you, I would not have thought about it’ and took one off a shelf.”

In one case, displaced parents brought along their one-year-old daughter and four-year-old son, but were not allowed to take them into the building. David and a CERT colleague looked after the children in the Ride-On bus used to transport residents from and to the high school. David said he kept the little boy entertained by answering questions about his uniform and allowing him to push some of the buttons on his helmet lights and try it on.. 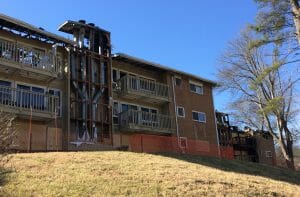 EXTREME DAMAGE The fire started on a balcony and swept under the roof along three buildings, Montgomery County Fire and Rescue Service spokesman Pete Piringer told this photographer. He said there had been no fire walls in place, in accord with standards when the buildings were constructed. Any new construction will require fire walls, he said. Photo by Pat Reber

How You Can Help

Donations that are needed include toiletries, bedding and small household items, and are being accepted at various places: 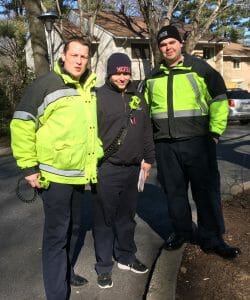 Members of the Rockville Volunteer Fire Department on their safety tour of New Mark Commons on February 3, the day after the fire. They knocked on doors to remind people to make sure their smoke detectors are working. Photo by Pat Reber 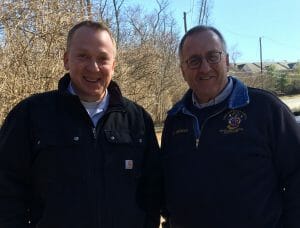 Pete Piringer, right, spokesman for Montgomery County Fire and Rescue Service, talked to reporters at Fireside Park Apartments the day after the fire. With him is Monte Fitch, a battalion commander during the fire response last Friday. Photo by Pat Reber

On the day after the fire, members of the Rockville Volunteer Fire Department went through adjacent neighborhoods, including NMC, knocking on doors to inform residents about the fire, and remind them to check their smoke detectors.