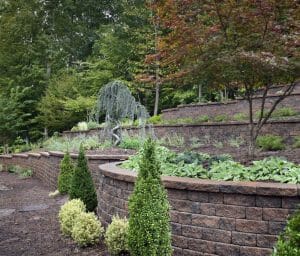 The Board agreed on this color and style for the $67,000 replacement wall around the green space in the 800 block. Belgard is the manufacturer of the wall.

At its February 1 meeting, the New Mark Board confirmed its decision to replace an L-shaped wall of failing timbers in the 800 block with earth-tone masonry blocks, setting a style that is expected to be echoed throughout the community as other walls need to be rebuilt. (see photo)

A sample block and color chart had been on public display at the Clubhouse the previous Sunday and before the Board meeting, prompting objections by some residents at the community forum to anything but new timbers. Nearly 20 residents viewed the color chart and proposed material.

The Board noted the urgency of removing an increasing safety hazard, with some timbers already falling out onto the sidewalk and others jutting out. Board members noted that smaller walls around New Mark have been replaced with masonry, that the earth-tone and structural technology of the building blocks had not been available 50 years ago, and that the Board’s duty is to find a long-term solution to a growing problem. 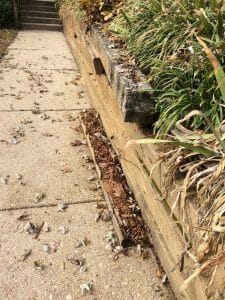 This is the wall that will be replaced, with work expected to start this winter. (Photo by Pat Reber)

Shireen Ambush, community manager from Abaris, explained that the kind of timbers available today have a life expectancy of 10 to 15 years, while concrete masonry’s life span is 25 to 100 years.

Board member Alex Belida said he hoped that “future Boards will be as diligent as this one and attend to the pressing maintenance needs of the community.”

“That retaining wall didn’t just suddenly deteriorate. It should have been dealt with long ago…” Alex said.

Board President John Daroff noted that questions about whether the use of masonry would violate New Mark’s hard-fought listing in the National Register of Historic Places had been put to rest through research. Shireen noted earlier in the week that she had personally spoken with officials including Peter Kurtze of the Maryland Historical Trust, who had been instrumental in pursuing the listing for New Mark and who reassured that that the designation could not be taken away for replacing timber with masonry.

John said he was “sympathetic” to the aesthetic considerations, but the longevity of the new wall was uppermost in consideration.

The $67,000 project was approved by the NMC Board of Directors at the January 4 meeting as one of the pending urgent safety needs in the community.

The contract for the replacement wall includes removing the current stairs and railing and the flagstone path that crosses the area.

The Board was in unanimous agreement over the style and earthy color offered by the manufacturer, Belgard. The Board directed Shireen to determine that the same style and color was available under the contract with Palmer Brothers. The firm wants to move ahead with construction during the winter, when the earth is still firm. The Board is to hold a public conference-call meeting to make the final decision on style and color.

“What we choose will be used over and over again,” John said.

Although residents who had advocated for timber replacements stayed throughout the entire meeting, none of them spoke up about the wall at the second community forum at meeting’s end.

A more detailed story about the Board meeting will appear in this month’s printed version of the newsletter.