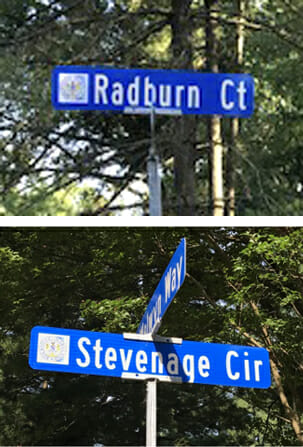 The first article in this series, below, provides a brief introduction to the concept of Garden Cities and New Towns. Most of New Mark’s streets were named by its developer, Ed Bennett, after these large-scale planned communities.

Radburn, New Jersey: Radburn is a planned community of 670 homes on 149 acres, governed by a homes association. It was started in 1929 by the City Housing Corporation from the plans developed by Clarence Stein and Henry Wright. On a smaller scale, this project drew on the Garden City concept of Ebenezer Howard in England. The plan for Radburn also drew on the neighborhood concept used 20 years earlier in Forest Hills Gardens, in Queens, NY. Radburn was to be a “town for the motor age” with traffic carefully separated from a pedestrian path system that does not cross any major roads at grade. Radburn introduced the largely residential “superblock” and incorporated some of the earliest culs de sac in the US.

Despite its small size, the community, like the Garden Cities, was intended to be largely self-sufficient, with residential, commercial, and industrial areas. Self-sufficiency in Radburn has been even less achieved than in the larger planned communities in Europe.

The other US planned community of this era was Greenbelt, MD, developed in the 1930’s with federal assistance. But Bennett did not choose to name a street after Greenbelt.

Stevenage, UK: Stevenage is 33 miles north of central London, between Letchworth and Welwyn. In 1946, it became the first “New Town” designated by the British government after WW II. Although the new development was unpopular with the existing residents, the town was built and now has about 84,000 residents. The town center was the first purpose-built traffic-free shopping zone in Britain.