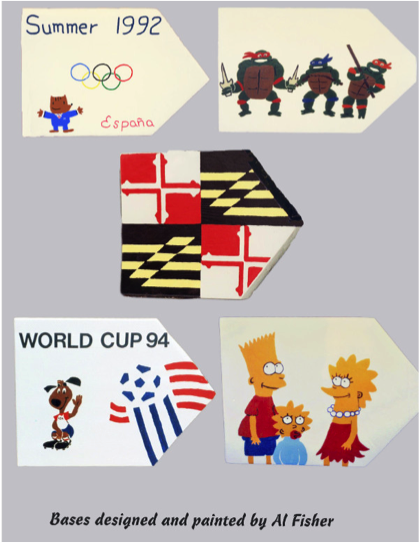 There were New Mark summer softball games on Sundays at Monument Park from 1972 to about 1996. Steve Krasnow recalls being drafted onto a team by the man from whom he and Rose bought their house, Phil Horowitz—who left the neighborhood but not the game! Ed Dager, resident since 1970, had the reputation as the hottest hitter in the league.

There were tennis tournaments that went on for days. The late Rupert Curry, a teacher and later human resources manager for IBM who served on Rockville City Council, is remembered for his determination across the net.

“If you were on the tennis court with Rupert, watch out. He was so strong, he scared the hell out of you. You ducked,” laughed Ursula Rein, a resident since 1972.

But for families with kids, the swim team, the Barracudas, has been the glue of summer life since the beginning. The team took several division championships, and a board in the Clubhouse hallway to the pool documents who holds what pool records since the ‘70s.

Barracuda swim team members sealed lifetime friendships. For adults, the pool also spawned several romances that led to marriage, including Tim Stewart, long-time pool manager and team coach from 1976 into the early ‘90s, and Ann Donovan, who was working as pool manager when they met. Jeff Grandin, who grew up at 701 NME, where his father still lives, met Becky Boyle at the pool when she was working as a lifeguard. The younger Grandins are now raising their own two children here.

Fun has been the Barracuda password: Pool rafting, tie-dying, and games keep them giggling through summer evenings when they are not churning water. Coaches deploy humor to keep up spirits. This summer, two plush Barracuda toys—one each for a boy and girl—will be recirculated every week for best improvements at practice and at meets. [See Barracuda Corner article for details.] In 1988, coaches Greg Deye and Mike Stock issued “fun” awards for things like the “most consistent wall misser.” [See image, right, courtesy of Judy Rudolph.]

But what happened on those Monday evenings of earlier years, when the pool was traditionally closed?

Ardis and Al Fisher, residents since 1969, know that story best. One of those evenings, they were playing catch in the common area next to their home, when a couple of kids “drifted by” looking for something to do, Ardis recalls.

That started a 25-year-long Wiffle Ball game. Over the years, Ardis estimates that at least 100 kids were regular players, and there were more who came sporadically. The Fishers are still in touch with some of them.

“We made up the rules as we went, “ Ardis said recently. “We played with everybody from kids still in diapers to young adults.” Al designed the bases according to changes in popular culture. [See collage, left, designed by Ardis Fisher, of bases created by Al Fisher.]

With the first warm day of the year, Mark Mermelstein, son of the community’s first administrator Judy Mermelstein, and others would come by knocking on the Fishers’ door asking, “When does Wiffle Ball start?” Ardis recalled. “Not before time change,” Ardis would reply. That was a compromise from the first few years, when the kids had to wait until school was out.

Ardis recalls intervening when two siblings were acting up one night. She asked them when they planned to start acting their age. “How old do you think we are? ” the kids replied. And as it turned out, they WERE acting their age, they were just quite tall, Ardis says, laughing.

Sally Guardia, resident since 1971, noted that the Fishers’ Wiffle Ball game was another New Mark activity that created lasting bonds. “That was a real pulling together of the kids,” she said.