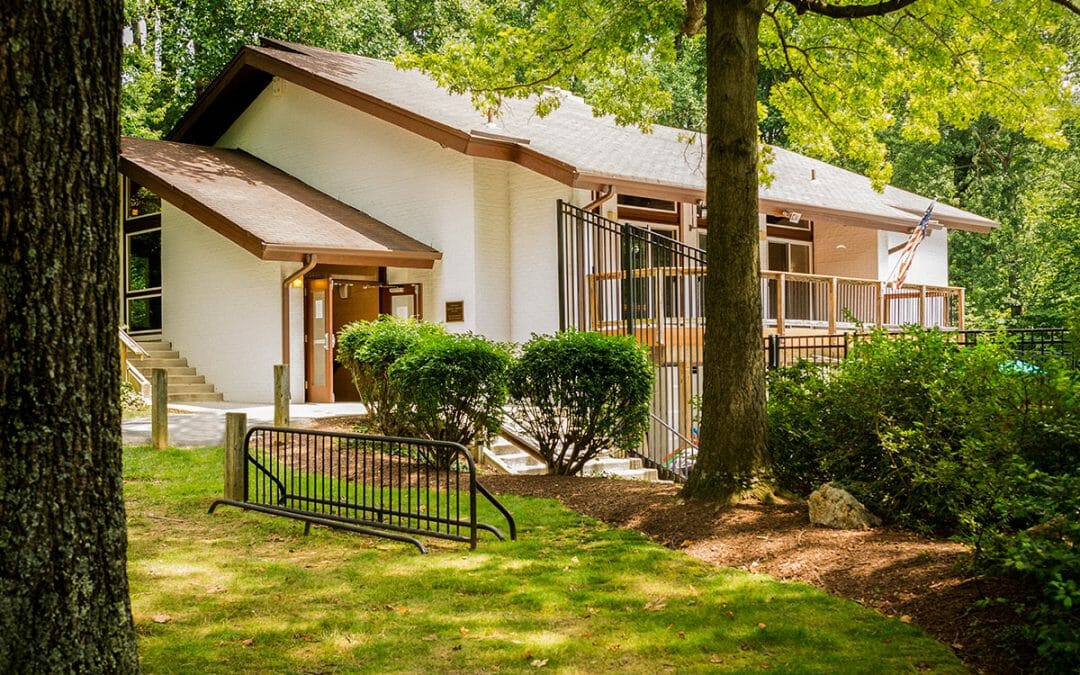 The neighborhood, completed in 1974, is a “planned unit development,” a type of project where the developer was allowed to build houses closer to each other than is normally permitted in return for creating open space and common areas. The plan that developer Edmund J. Bennett Associates followed produced a neighborhood with exactly one through street; all the other roads are dead ends, many with no more than five or six houses. None of the 186 single-family residences or 198 town houses faces onto New Mark Esplanade, the main drag.

“Whoever did the layout was brilliant,” said Ricki McKenzie, a resident and landscape architect by training. “The single-family homes are clustered, yet the sight lines are really well thought out. There is a sense of privacy. We don’t have the feeling of being overlooked.”

McKenzie also praised the town house design. “They appear small but are large inside. They take advantage of the natural slope of the land,” she said. For both the town houses and contemporary and colonial-style single-family houses, “the siting is wonderful.”

There’s another benefit to the design. “On a different street, my sons would have been dead in a week,” said Susan Klise, only half joking about how safe her two boys are on the cul-de-sac where she has lived for 15 years. It’s the kind of neighborhood, she added, where everyone knew Pat the mailman, who lives in New Mark and only recently retired. The piano teacher lives nearby, too.

Klise loved New Mark as soon as she moved in. It was July, and both the big old trees and the neighbors seemed welcoming. That winter, the first snow brought a neighbor over with a pan of brownies and her 5-year-old daughter. The 5-year-old is now in college, Klise said, adding, “I’m like her aunt.”

The big old trees were there because the developer made it a goal to preserve them. The land was a forest, said Ken Misner, president of the New Mark Commons homeowners association board. “The builder said to make just enough space for the houses. It would have been easier to knock everything down, but he didn’t.”

Residents appreciate the results. “We have 20 mature trees on our quarter-acre lot,” said Ricki McKenzie’s husband, Stewart, also a landscape architect. “We live in a forest.” The presence of so many older trees made a big impression on him and his family as they scouted out the neighborhood before moving in.

Trees are New Mark’s main feature–and part of what attracted Rockville Mayor Rose Krasnow to the neighborhood. “Every landscaper complains that it’s hard to get grass to grow, but we think they [the trees] are special,” said Krasnow, who also is administrator for the homeowners association.

The landscapers’ nemeses include black gum, locust, oak, tulip poplar, red maple and pine trees. Bradford pears that the city planted line New Mark Esplanade, creating a canopy of white blossoms over the street every spring. Homeowners association rules help preserve the leafy assets: Residents may not cut down any live hardwood trees without explicit permission from the board.

The combination of lots of green and little traffic gets residents out on their cul-de-sacs and the lighted walkways throughout the neighborhood. People meet each other and chat. They talk over back fences, share recommendations for house painters and take in vacationing neighbors’ newspapers.

It could have been somewhat different, however. Originally, a small commercial area was slated to go in near the community pool and clubhouse, and there would have been another through street to permit access. The homeowners association fought to close off the street and won. That made the site much less desirable for commercial construction, so the plan was changed and 13 California-style villas were built there in the mid-1980s.

With a pool, of course, there is a swim team, one that participates in the Montgomery County Swim League. The Fourth of July brings an all-day celebration at the pool, including clowns, deejays, water games and a greased watermelon contest. The closing event is a parent-child egg toss that typically exacts a toll on 14 dozen eggs.

Then, on the last day of the swimming season, dog owners bring their pets for their annual swim. It’s a lot of fun, Krasnow said– but she recalled one neighbor, a few years back, who didn’t know the rowdy agenda. “She panicked and called me and left a message–while I was there,” Krasnow said.

Residents can rent the clubhouse for special occasions. It also is the setting for the international potluck dinner and the welcome party for newcomers, both held annually. “We have a very diverse population from many places,” Krasnow said.

Different as they can be in background, residents cited similar reasons for moving to New Mark Commons. In 1972 Misner and his wife, Geri, both fell in love with the sense of community and the amenities, which include a 4 1/2-acre artificial lake with a fountain in the middle. About half the neighborhood’s town houses cluster around the lake.

The lake is beautiful, but it can also be an annoyance. For one thing, it attracts geese, which become a nuisance. Although the association considered exotic solutions, such as renting a border collie to scare the birds off or spraying the area with orange blossom scent to repel them, a small wire fence appears to have the geese under control these days. The other difficulty is getting rid of the silt that collects in the lake, so that it doesn’t go into nearby streams and eventually the Potomac. That means draining the lake periodically, an expensive effort.

The Misners liked being within walking distance of downtown Rockville. Ten years later, when they decided to move from the town house they had bought, they looked elsewhere but found the best value was a colonial in the neighborhood. “We don’t intend to leave,” he said.

When the McKenzies made the tough decision to move from their D.C. home overlooking Rock Creek Park, a New Mark Commons house was one of the first they visited.

“We wanted space and trees,” Ricki McKenzie said. They liked the house, and their two sons fell in love with the 1950s-style wet bar in the big basement. On the other hand, she said, she and her husband had reservations about the association’s architectural control guidelines.

“We didn’t like the idea of being told what we could and couldn’t do, being independent souls,” she said. The rules govern such factors as the color of paint on the outside of homes, the location and style of decks, and the type of fencing.

The family looked at other places but kept coming back to the New Mark Commons house. Now, Ricki McKenzie said, “we’ve really changed our minds about the homeowners association,” realizing that much of what they like about the neighborhood is that way because of the guidelines. Residents pay $600 to $700 a year in association fees.

Sherry Matz bought her town house three years ago strictly because it seemed to be a good value, she said. “I was blind to the neighborhood,” Matz said. “But if I could have invented my neighbors, they would be the way they are.”

Like the Misners, Bob and Lyda Astrove moved from a New Mark Commons town house they bought in 1986 to a single-family house. They both were attracted to the neighborhood because it looked like home, Lyda Astrove said, but that was especially true for her husband. He grew up in Carderock Springs, another Bennett development in Montgomery County.

When it was time to move from their town house, she said, “we looked everywhere. We looked way out in Germantown and Damascus. We looked in Potomac and Flower Valley, but we kept coming back to wanting to stay in New Mark. We didn’t want to leave the neighborhood.”

WHERE WE LIVE: New Mark Commons